The issuer is solely responsible for the content of this announcement.
SAF-HOLLAND acquires Stara Group, the leading distribution company for trailer components in Finland and Sweden


Luxembourg, February 8, 2019 - SAF-HOLLAND has taken over the business of the Finnish family-owned Stara Group. The Group's companies based in Finland and Sweden specialize in the distribution of axle and suspension systems for trailers in the original equipment and aftermarket segments. With this acquisition, SAF-HOLLAND's is strengthening its position in Northern Europe with the aim of further expanding its market share in this region.


SAF-HOLLAND S.A. ("SAF-HOLLAND"), a supplier to the trailer, truck and bus industries has acquired all shares in the Finnish Stara Group with effect as of February 1, 2019. SAF-HOLLAND is thereby acquiring the family-owned business operations of the two companies AB Stara Parts Oy, Finland, and Trailax Aktiebolag, Sweden. The purchase price is in the low tens of millions. The Stara Group employs around 20 people and generated sales of just over EUR 10 million in the past financial year. The company has been included in the consolidated financial statements of the SAF-HOLLAND Group as of the date of the acquisition's closing.


The Stara Group was previously the distribution partner of the SAF-HOLLAND Group in Finland and Sweden, focusing primarily on axle and suspension systems for trailers. In addition, the Group has an aftermarket network in the region with a total of 3 outlets. Stara also sells third-party truck and trailer products to a lesser extent.


Through this acquisition, SAF-HOLLAND aims to strengthen its brand awareness in Northern Europe. With Group-owned sales and service companies having a broader and more intensive coverage of the Finnish and Swedish markets, the Group is also aiming to expand its market position even further and gain additional market share.


"Proximity and direct access to our end customers is a key success factor in our industry. The comprehensive customer base and established Stara network offer us an ideal starting point for addressing the Nordic market using our entire product portfolio even more effectively in the future. By focusing on the SAF-HOLLAND product range, we intend to further deepen the penetration of this important market and expand our market share", says SAF-HOLLAND CEO Detlef Borghardt, explaining the reasons for the acquisition.


President EMEA and CPO Alexander Geis adds: "The acquisition of Stara will secure our business in Northern Europe for the long-term. By insourcing our sales activities, we are increasing our share of added value as well as our profitability. The resulting prospects in the aftermarket business are also important to us, as many of our trailer customers have a large installed base of SAF-HOLLAND products, which opens up considerable potential for us in terms of supplying our fleet customers."


About SAF-HOLLAND:SAF-HOLLAND S.A., located in Luxembourg, is the largest independent listed supplier to the commercial vehicle market in Europe delivering mainly to the trailer markets. With sales of approximately EUR 1,139 million in 2017, the Company is one of the world's leading manufacturers and suppliers of chassis-related systems and components primarily for trailers, trucks, buses, and recreational vehicles. The product range comprises axle and suspension systems, fifth wheels, kingpins, and landing gear marketed under the brands SAF, Holland, Neway, KLL, V.Orlandi and York. SAF-HOLLAND sells its products to Original Equipment Manufacturers (OEM) on six continents. The Group's Aftermarket business supplies spare parts to the service networks of Original Equipment Suppliers (OES), as well as to end customers and service centers through its extensive global distribution network. SAF-HOLLAND is one of the few suppliers in the truck and trailer industry that is internationally positioned in almost all markets worldwide. With the innovation campaign SMART STEEL - ENGINEER BUILD CONNECT, SAF-HOLLAND combines mechanics with sensors and electronics and drives the digital networking of commercial vehicles and logistics chains. More than 4,400 committed employees worldwide are already today working on the future of the transportation industry.

08.02.2019 Dissemination of a Corporate News, transmitted by DGAP - a service of EQS Group AG.The issuer is solely responsible for the content of this announcement.The DGAP Distribution Services include Regulatory Announcements, Financial/Corporate News and Press Releases. Archive at www.dgap.de 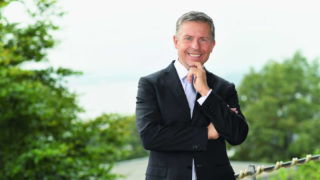